Private Tour to Pavlovsk Palace and Park from St Petersburg 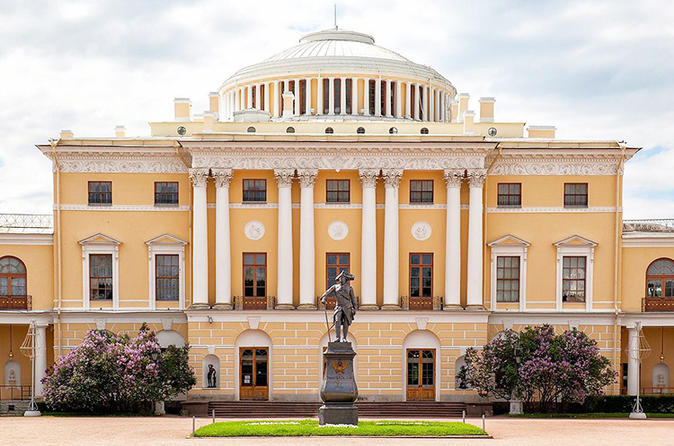 Take some time to visit the beautiful Pavlovsk Palace, perhaps the most resplendent of the Russian imperial family's residences, once the home of Emperor Paul I. Step back in time to a period of fascinating history and opulent living.

On this 4-hour tour you will have your private guide with you and enjoy comfortable transportation in a private car. You will be met in your hotel lobby and dropped back there after this tour.

The Pavlovsk Palace located a few miles away from the Catherine's Palace in Pushkin stands out from the other summer residences of the Russian monarchs. Unlike its stately counterparts, the Pavlovsk Palace does not feel official at all and has the aura of a country mansion. The interiors are lavishly decorated and a picturesque English park offers sights of astounding beauty.

The history of the Pavlovsk Palace dates back to 1777 when Catherine the Great presented the area to her son Paul to mark the birth of his heir, future Emperor Alexander I. Using the money that came along that gift, Paul and his young wife Maria traveled to Europe to purchase works of art for the decoration of the new palace. German-born Maria was a woman of many talents and she masterfully designed a number of palace interiors herself.

Following the Revolution of 1917, the Pavlovsk Palace was turned into a museum. The Nazis who seized the area during World War II destroyed the palace and looted its many treasures. It took over 20 years to recreate the beauty of the Pavlovsk complex following a painstaking reconstruction using original designs and broken fragments of works of art.

The Pavlovsk Park scattered on the territory of over 600 hectares is the biggest man-made park in Europe. It is undoubtedly one of the most beautiful parks in the world. It was designed by Europe's most prominent architects of late 18th century in the English manner. The park is decorated by many statues, monuments, small bridges, and is home to several architectural pavilions all of which create an atmosphere of romanticism. During Winter days the visitors can enjoy authentic Troika rides around the park.

Take some time to visit the beautiful Pavlovsk Palace, perhaps the most resplendent of the Russian imperial family's residences, once the home of Emperor Paul I. Step back in time to a period of fascinating history and opulent living.