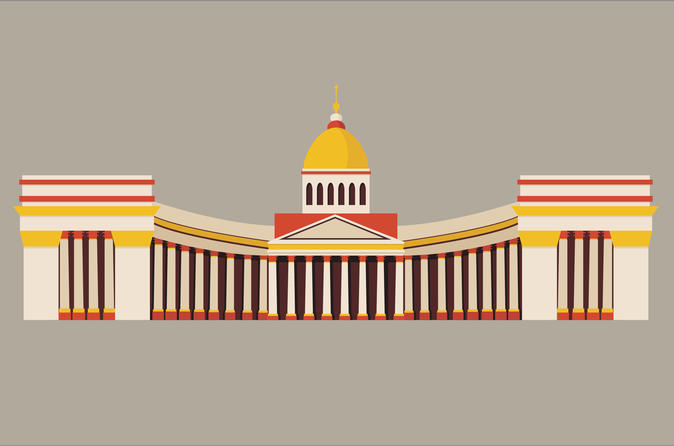 This full day tour provides a visit to the exclusive Yusupov`s Palace as well as an overview of the opulent St. Isaac`s Cathedral and famous Faberge museum. In addition, take a pleasant Boat trip along rivers and canals.

St. Isaac’s Cathedral - With its imposing golden dome, St. Isaac’s Cathedral is one of the most impressive sights and recognizable symbols of St. Petersburg. The exterior of the cathedral conceals a breathtaking interior adorned with gold, semi-precious stones, mosaics, and masterful oil paintings
Explore the Yusupov’s Palace, a museum which provides an interesting look at the lives of the aristocracy of the 19th and early 20th centuries. The palace features exotic rooms such as the Moorish Room, a wonderful Rococo theatre that is still used for concerts, etc. Yusupov’s palace is perhaps best known as the site of the murder of Gregory Rasputin, a man with mystical powers who influenced the family of the last Russian tsar.
The private Faberge Museum opened its doors at the recently renovated Shuvalov Palace in 2013. This unique collection was acquired at international auctions over 10 years. It is comprised over 4000 works of art from the late 19th and early 20th century, including twelve Faberge works, nine of which are the famed imperial eggs that previously belonged to the Romanov family. As a part of your exclusive visit, explore the former living quarters of Count Shuvalov filled with royal silverware, precious icons, religious ornaments, paintings and other objects of decorative and applied art.
Take a relaxing Boat trip. View the city from the waterside. A boat wends its way along the Fontanka, the Moyka, the Winter Canal and a loop on the Neva river. Main sites along the way include Anichkov Bridge, Engineer’s Castle, Summer Garden, the Salt District, Field of Mars, Church on Spilled Blood, General Staff Building and finally, when you get to the main river, St. Peter and Paul’s fortress, Trinity Bridge, the Winter Palace.

This full day tour provides a visit to the exclusive Yusupov`s Palace as well as an overview of the opulent St. Isaac`s Cathedral and famous Faberge museum. In addition, take a pleasant Boat trip along rivers and canals.